Gorillas Caught On Camera: Singing And Farting In The Jungle - Traveler Door 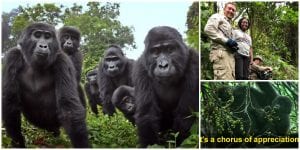 Gorillas Caught On Camera: Singing And Farting In The Jungle 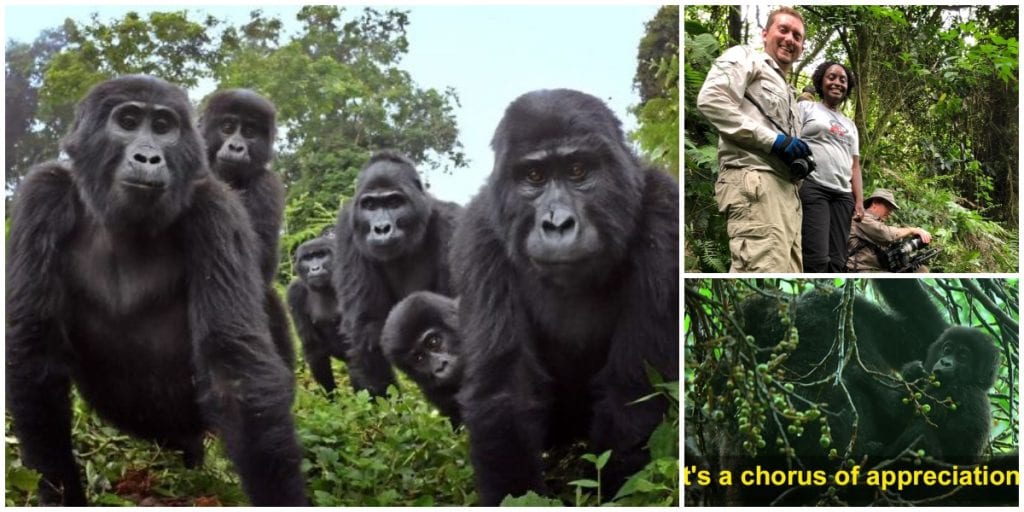 Nature is a beautiful thing. Majestic and awe-inspiring, but sometimes it is just outright hilarious. If you have ever seen a panda fall out of a tree or a baby elephant being amused by its own trunk, then you know what we are talking about. Dian Fossey did groundbreaking work with Gorillas in Rwanda, studying them daily for almost 20 years. Since her tragic passing, these magnificent creatures’ numbers have declined drastically, and research opportunities are becoming scarcer. Examining them is dangerous and very invasive, and with such low numbers, we humans should rather keep our distance. Luckily PBS has developed a non-intrusive way to study some of the world’s most brilliant creatures. Read on to see what they devised.

Where It All Began

Studying animals has always been a bit of a catch-22. We want to learn more about the incredible natural world, but at the same time, we don’t want to interfere. So, what to do? John Downer Productions solved this moral conundrum.

The production team started by disguising a remote-controlled camera as a boulder and having it roam between animals in their natural habitat. There is nothing natural about a moving rock, but it beats a human standing in between a pride of lions!

The remote boulder got upgraded over time. It didn’t take long before the team developed hyper-realistic animals that would move around remotely and interact with the animals being studied. Spy in the Wild 2’s series “Spy Creatures” was born.

More than 50 spy-creatures have been let loose in the wild, with the main focus of observing animals in their most natural state. These creatures are as close to the real thing as you can get, and their emotive features and animatronics are a dead ringer for the real thing.

Gorillas in the Ferns

Spy Gorilla was born and placed in between some ferns amongst the troop of gorillas. It was armed with a 4-k camera in its eye and high-quality sound recording equipment. Its whole body was mobile and was extremely lifelike.

The gorillas did not seem to question its authenticity and accepted the baby into their family. The researchers opted to make use of a baby as adult gorillas are very territorial and could have easily seen an adult robot gorilla as a threat.

Dr. Gladys Kalema-Zikusoka is an expert on these great apes and has been studying them for more than 25 years in Uganda. She works along with Conservation Through Public Health (CTPH) to improve the safe cohabitation of humans and mountain gorillas.

“Footage from Spy in the Wild 2 provided a unique insight into the behavior of mountain gorillas,” she explained. “It brought out their personalities and showed that they are naturally curious and very intelligent.”  Twenty-five years of research did not prepare Dr. Gladys for what she was about to witness on the spy cams.

“When the robotic spy baby gorilla was introduced, I was surprised when the adult blackback male gorilla became protective. I was even more amazed when on the next visit, the silverback gently moved the other gorillas in his group away so that he could get a closer look at this baby who looked like them but was clearly not a gorilla.”

“When he accommodated this stranger, the rest of the group went on to take a closer look at the spy gorilla,” she said. Even the baby gorillas joined in and started beating their chests to show the robot that they wanted to play.

It’s All in the Details

The male stared straight at the camera, and viewers are able to see all the intricate facial expressions and sounds that he uttered. The baby averted its gaze as a sign of respect, and it seemed to do the trick when the male allowed the rest of the family to inspect.

“For the gorillas, the eyes were extremely important,” Gordon said. “Mountain gorillas learn a lot from each other by staring into each other’s eyes. Therefore, we designed the spy gorilla to be able to close and move his eyes so that when necessary, he could avert his gaze to show respect to the real gorillas,” said series producer Matthew Gordon.

Gorillas do little other than eat and sleep, so after the novelty of the newcomer wore off, they headed right back to their lunch. Gorillas eat more than 40 pounds of leaves and seeds per day, so this can become an all-day affair.

The baby was also able to mimic eating and joined in on the feast. It was there where the team first captured an incredible display that has never before been caught on film. They all joined in a harmonious song and, with grunts and humming, created a melody that surprised everyone.

Even though the melody won’t make it onto the Top 100 charts anytime soon, it was a magnificent display nonetheless. By capturing this evidence, the researchers were also able to derive lots of other pieces of information about these gorillas.

They found that the male gorillas “sang” more than the females. They also saw that it was mostly older gorillas that displayed this behavior. Another interesting finding was that they mostly sang when eating plants and seeds and not so much when eating insects.

As if singing gorillas wasn’t quite interesting enough in its own right, the team also discovered what happens when you try to digest 40 pounds of food per day. The gorillas demonstrated their unique ability to fart on a seemingly non-stop basis.

Their gassy outlets could be heard loud and clear over the recorded audio, and young and old let em’ rip all day long. The series narrator best described it as “they live in a semi-permanent state of flatulence.” Well said!

This series has gone on to feature more than 50 animatronic animals in the wild, and series producer Matthew Gordon explains that it is no small feat. “The artists looked at dozens of videos and images of the animals in the wild to make them look as realistic as possible.”

“It’s also about puppeteering. It is important to learn how animals move. We often have professional animatronic engineers come out with us in the field to control the spy creature. The engineer makes the creature move in the most realistic way possible,” he says.

Philip Dalton is a producer on the series and has worked closely with various experts to help John Downer Productions create the most scientifically accurate series imaginable. “[Penguin researcher, Dr. Yvon Le Maho], picked up on the fact that if you take the human out of the equation and use the spy creature technology to get in close, you can get really good results,” he said.

On researching penguins, he explained that “[Yvon] was able to quantifiably say that using robots is a far better method than having humans collect data because it does not stress out the birds. That was very satisfying for our team because not only is it a good filming tool, it can be quite a useful tool for scientific purposes as well.”

Just like gorillas, hippos are incredibly dangerous animals. They are nocturnal, elusive, and aggressive. This makes them very difficult to study, and teams have previously relied on drones. But spy-cam animals have been able to gain the trust of the herds and gather valuable information.

The hippo was built to walk underwater just like real hippos and captured fish, giving the hippo’s a spa treatment! The baby hippo was also able to wiggle its ears to show the aggressive males that it comes in peace and it is not a threat.

The African Wild dog is another highly endangered and social animal that they have been able to film. Dolton said that “most animals are very curious at first, they will carefully inspect the spy, often sniffing first. They quickly work out the spy is not a threat or food.”

“That is when they relax and the spy becomes very much part of the scenery. It is at that point we get very interesting behavior, being so close to the animals means we end up filming extraordinary detailed behavior and sound.”

These spy cams are not only great for entertainment, but they also create vital awareness for the natural world. Spy orangutan, Biruté, was a feature at the Earth Optimism Summit in 2017 that was hosted in Washington D.C. Dalton is very enthusiastic about all the incredible conservation efforts being implemented globally.

“There is actually quite a lot to be optimistic about, and that’s what this summit was about. It was looking at innovative research and success stories to try to buoy people up into saying: ‘Look, it’s still worth getting actively involved and coming up with fresh, interesting ideas to change the world.”

Dalton explains the demands on them as filmmakers are multi-faceted. “This is a totally different dimension to a wildlife film. As a filmmaker, you’re always looking for innovative ways to capture wildlife behavior. For us, we all believe that the best way to film an animal is by getting the cameras as close to your subject as possible without disrupting their natural behavior.”

“By physically having an undercover camera within inches of an animal captures something quite extraordinary. Because the onboard camera has a wide-angle lens with many microphones, you are getting real sound and a wide-angle field of view. Giving you the feeling that you are actually there as opposed to being a passive observer. We know from feedback from viewers who have watched these films that they are very different because they are able to really engage emotionally with the animals.”

Why does it work?

The emotional aspect of the process is what Dolton attributes to their success. A new demographic is attracted to these shows as there are more layers to the programming than traditional nature programs. Therein lies the key to their accomplishment.

“There are a lot of people that would not necessarily want to engage in a wildlife film, but when they see a robotic gorilla or robotic fruit bat filming in the wild, it definitely lures in a new type of audience,” he said.

Doing it for the Kids

It is important to get the younger generation involved as they are pivotal to the continuation of conservation. “[Dalton’s] team does a lot of talks at schools, and when [they] take along [their] spy creatures, it inspires so much interest and excitement within the entire group of kids.”

“You would not necessarily get that same engagement if you did not have your spy creatures as part of that toolkit. For them, they love it, and they often go away afterward, to do their own school projects, building their own spy creatures and deploying them on the school grounds, which brings in another dimension to wildlife film.”

Spy in the Wild 2 has already made significant headway in the non-invasive research field, but this is not where the team will end their journey.  Dalton said that he is “really interested in communicating with animals. It would be great to be able to interact with an animal that somehow illuminates to us as humans their intelligence and their ability to communicate through their language.”

“I would like to be able to have a spy creature that can somehow accomplish this. I am a great believer that we have so much in common with animals. We are more connected than we think we are, and animals are definitely more intelligent and complex than we could ever imagine. I do not quite know how we would do it, but we have got a few ideas. I’m already talking with a few scientists that specialize in animal communications to see what we could do to try and tap into that.”